Salaš Krajinka – An Education in Cheese and Hospitality

View of the hills surrounding Ružomberok

It’s not difficult to find a place to rustle up a plate of bryndzové halušky anywhere in Slovakia, or a really good plate of it for that matter.  But when an opportunity comes to sample some halušky from the restaurant featured in the sheep cheese section of the trusty Lonely Planet guidebook (yes, there is a sheep cheese section), you must not pass it up. At least, that’s my philosophy.

Salaš Krajinka, a rustic, traditional Slovak restaurant, is two kilometers outside of Ružomberok in the Liptov region. I assumed in a country with an extensive public transportation system, getting from the town to its famous restaurant would be no problem.  But when I called for instructions the man on the other end of the line informed me few buses run there from Ružomberok, making life difficult for the car-less, such as myself and my traveling cohort.  Chris and I resolved to bite the bullet and call a cab, as the restaurant visit was supposed to be the main event of our Saturday. But before I could hang up to make the call the mysterious man on the phone offered to pick us up in town, an offer too good to refuse.

Twenty minutes later we were in the backseat of a Volvo, zooming between the rolling Low Tatra Mountains with our new friend Joe, discussing all of the nitty gritty details of Slovak cheese business.  Joe, whose family has been producing cheese for generations, appeared to be in his mid-30’s and was dressed casually with a frayed red and yellow Yankees hat atop his head. He seemed to be the face and unofficial (or maybe official) public relations man for Salaš Krajinka, and a good one at that. He had travelled extensively and proved to be an excellent conversationalist with his easygoing manner and perfect, accent-less English.

As we moved along the winding main road leading to the restaurant, I explained that we were extremely interested in behind-the-scenes information about our newfound love of bryndza, and its link to Slovak culture.  We really lucked out as Joe proved to be a walking encyclopedia on all things sheep and cheese, and being a very big advocate of understanding what you’re eating and how it was made, he was eager to share all he knows. 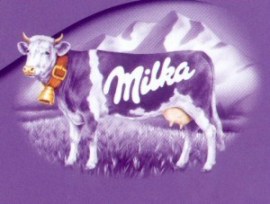 “Kids today think that cows are lavender and white because that’s what they see on the chocolate bar wrappers,” Joe said, referring to the popular Milka chocolate bars sold throughout Europe. “They have no idea where what they’re eating really comes from.”

The truth is if more of today’s generation did understand how their national food was produced, they would realize it is a process that pays respect to generations of Slovak sheep farmers and mountain culture, and therefore one to be preserved. Joe’s family and many other farmers throughout the country pride themselves on keeping up the tradition and quality of both sheep and cow cheese production, which has been a part of Slovakia’s culture since it became a staple in the 17th century.  “How we make it is the way it always has been made and the way it always will be made,” Joe said.

Before we knew it, we were pulling into the restaurant’s driveway.  As we ascended the hill that the Salaš sits upon, we passed one hut selling the homemade cheese and another selling tea and freshly baked pastries.  The space between the huts and the parking lot is spattered with quirky wood sculptures and a few strutting chickens. The restaurant itself is a sprawling one-story building, reminiscent of the traditional Slovak log houses seen throughout the countryside.  It was here that Joe apologetically left us for a work engagement, but promised to return in a little while to give us a tour of the in-house cheese production.

Since we had some time to kill, Chris and I thoroughly explored the property.  This included taking cheesy posed pictures with the sculptures, failed attempts to capture some of the resident rabbits, successful attempts to communicate with local goats, sampling some scrumptious blueberry-filled pastries, and finally heading to the restaurant for our main event. 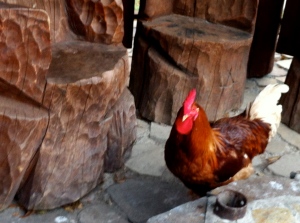 Some of the farm life in action

The inside of the restaurant is as charming as the outside with wooden beams and a huge clay stove.  Of course the real selling point is the back wall, which is made entirely of windows looking out onto the fluffy sheep that produce the diner’s cheese.  The snappy service must be necessary to handle the constant flow of people coming through the double doors. Even at 3:30 p.m. in the “off-season” Chris and I ended up sharing our table with another couple, a practice which is much more readily accepted in Slovakia than I imagine it would be in America.  We ordered the legendary bryndzové halušky with extra smoked sheep cheese on top rather than the traditional fried bacon fat. (We figured if there was ever a good place to double up on cheese, this was it.)  Even though our dishes came surprisingly quickly, the plates of potato dumplings smothered in gooey sheep cheese were nothing short of perfection. END_OF_DOCUMENT_TOKEN_TO_BE_REPLACED