Looking Back on Bratislava

Thus far, in my three months teaching in Slovakia, Czech Republic and Austria, my path has crossed both Prague and Bratislava twice.  I spent this past weekend soaking in the holiday spirit in a much more decked-out Prague than I saw in early October. The weekend before that, I revisited Bratislava as its Christmas decorations and festivities first came together.  While Prague was undeniably a scene of seasonal perfection, with its traditionally decorated tree and softly twinkling lights. However, the masses of people bottlenecked among the main markets reminded me of just how much I love the much lower-profile capital city of Bratislava, and yet how little I have mentioned it here. 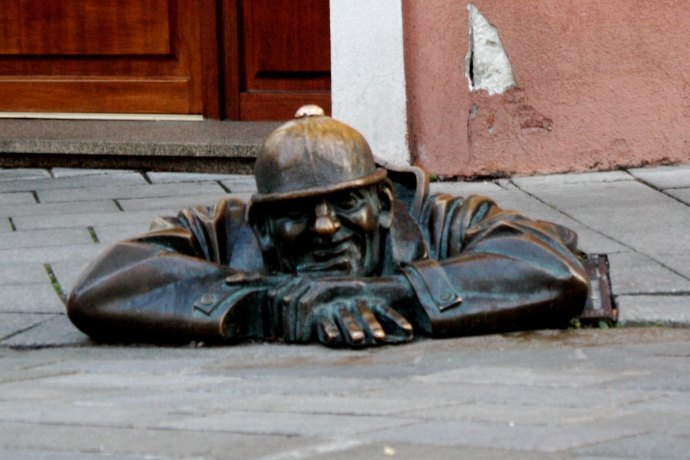 The “Man at Work” Statue. Allegedly is the most photographed thing in the whole city.

On both of my visits to Bratislava, I have been struck by how livable the city feels.  As you walk through the old town, the buildings and cobblestone streets look similar to those of Prague, but you can’t help but notice how many more locals dine next to you in cafes and how much more elbow room you have, even in the main square. You feel as though you are seeing a snapshot of the city’s everyday routine.  Dogs are being walked, groceries are being carried, lives are being lived.  Despite having low expectations for the city based on lack of hype from other backpackers, I found myself having to pry myself from it both times Sunday afternoon called me away.

If there was ever a question about how I felt about the city, the Christmas market confirmed my affection. While it held the same smoky huts filled with sausages, crepes and mulled wine, and the space was crowded without a doubt, the feeling was entirely different. Few words of English could be heard and the giant crowd dancing around a man with an accordion could sing along with each word of the Slovak folk songs.  The small gifts sold in stands did not all proudly bear the name of the city, unlike those in Prague, most likely because most people would not be nearly as impressed. But to me, that made them much more appealing. The electric blue flashing lights on the tree may have been a little over the top, but the overall experience, like most of mine in Bratislava, just felt authentic.

Looking out from Devín Castle onto the Danube.

This is not at all to downplay the impressiveness Prague.  The city left me in awe and I had a fantastic time each time I was there. There is a reason people flock there and I will go again the first opportunity I have.  But when I look back on my time here, Prague will be a highlight, but Bratislava will be my soft spot. So here are some snippets from the not-nearly-enough time that I spent there. Maybe you’ll be inspired to check it out yourself.

(P.S. If further inspiration is necessary the city’s Shtoor Cafe, pictured further below, is the home of 1.30 Euro bottomless coffee in a continent of baby-sized instant Nescafes.)

The mighty Danube flowing below the castle. 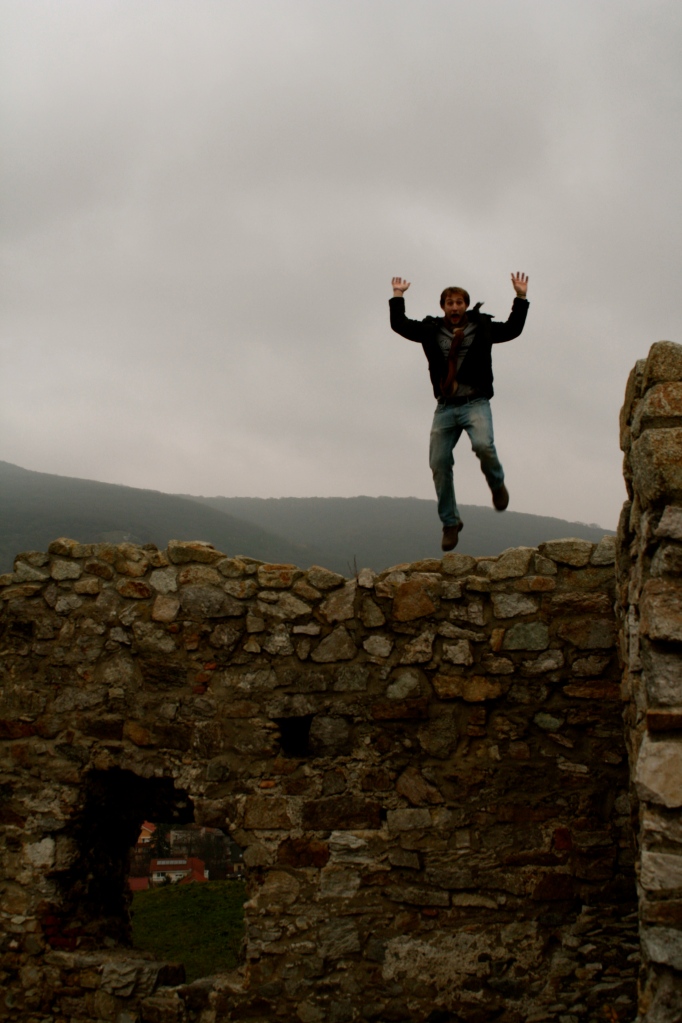 After climbing up the castle walls, Chris strikes a risky pose.

END_OF_DOCUMENT_TOKEN_TO_BE_REPLACED

So Prague is amazing. I’ve been suspecting that for years based on rave reviews from friends and pictures in books, but I have finally confirmed it with my own eyes.  In my childhood (and admittedly more recently) I had romantic, fairy tale ideals of what European cities would be like.  Paris, London, Vienna. They were all perfect in their own not-quite-what-I-expected-but-still-exceeding-all-expectations way. But Prague, Prague was the closest thing I will ever find to my European fantasy city. Somehow the castle looking down upon the city and the regal, yet not pompous, buildings, combined with the glow of the lamps lighting cobblestone streets that wind through so much history. I can’t really explain it, but you can feel it.  So as I am at a loss of appropriate words to explain my Prague experience, I’ll share my pictures and perhaps tempt you to experience it for yourself.

Coming upon the Old Town for the first time as dusk was falling. A very pleasant coincidence. 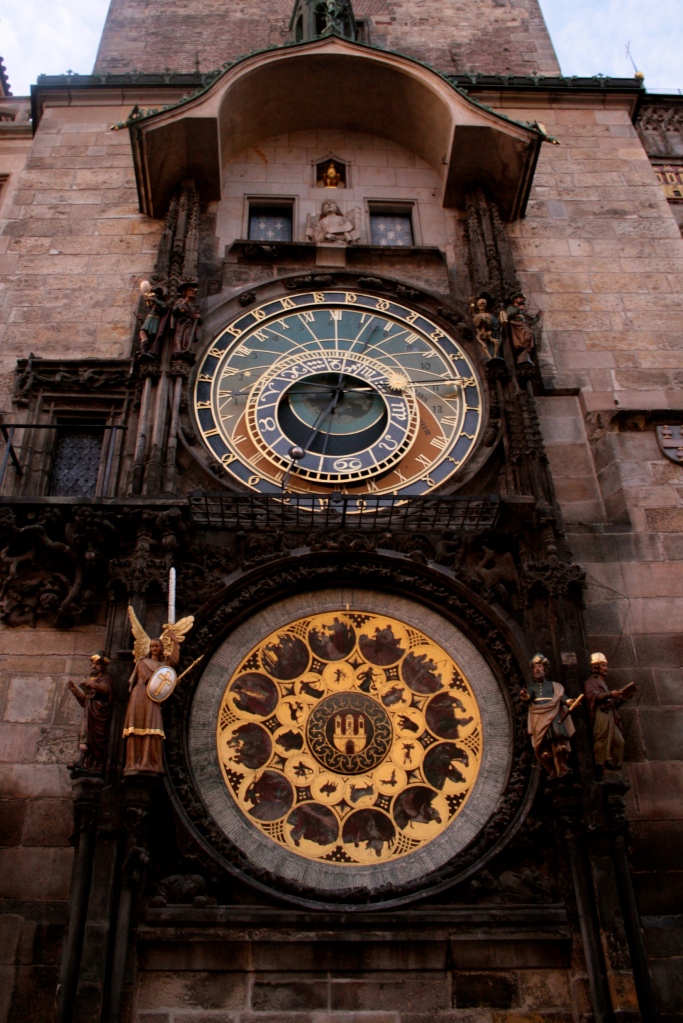 The Astrological Clock. One of those things you have to see to say you’ve seen it. However, once you keep in mind the time it was created, it’s pretty technically amazing.

Our Lady of Tyn Church in the Old Town

Of course, there are street musicians galore, but this guy had the most heart, and the most style.

View of Prague’s famous bridges from above

Newlyweds trying to create a perfect moment in front of St. Vitus. Not the only pair we saw running around the city taking pictures in front of magnificent backdrops either.

END_OF_DOCUMENT_TOKEN_TO_BE_REPLACED

This past week my journey took me to a place I have wanted to go for years – Czech Republic. Of these seven days, two, of course, were spent in Prague, the famous and historic Czech city with a metropolitan population of 2.3 million. The other five, however, were spent 90 minutes outside the capital in the village of Načeradec, population: 600 – at best. Fantastic times were had in both places, and each were perfect in their respective ways. If I had to sum it up, I would say in all of the fairy tales you read as a kid, Prague is the castle where the princess lived and Načeradec was the magic forest she runs away to when she wanted to talk to deer, get chased by wolves or other stuff like that.

The details on Načeradec are to come tomorrow. Prague photos will be up later this week. For now, though, here is a sneak-preview picture from each magical place.

Dusk settles on Church of Our Lady Before Tyn in Prague